Karva Chauth is celebrated on the fourth day (-chauth) of the waning moon (the period after Sharad Poornima) in the Hindu month of Kartik. In 2011, it will be celebrated on 15th October, ten days before Diwali. The festival originated as an occasion for celebrating friendships and camaraderie among women. Over the years, it has evolved into a day for women to keep a day-long fast and pray to Goddess Parvati for the health and longevity of their husbands. (Benefits of fasting) 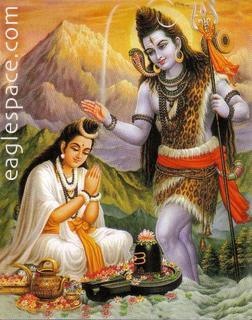 On a typical Karva Chauth morning, women wake up before sunrise, and eat a meal called sargi, which consists of dry fruits (like almonds, pistachios and raisins) and milk-based sweets given to them by their mother-in-laws. In the afternoon, the parents of newly-married women send a gift in the form of baya to their daughter’s mother-in-law. This gift can be in the form of clothes, money, or traditionally, simple sweets.

The Marriage of Shiva and Parvati

According to the Puranas, Parvati (also known as Uma) was born to the king of the mountains, Parvatarajan. The sole purpose of her creation was to be united with Shiva in marriage. Lord Shiva had resolved not to get married after the death of his first wife (Sati), but the celestials feared that the whole universe would be destroyed if Shiva continued his deep meditation for hundreds of years. The Puranas state that Parvati had to perform great penance and austerities in order to distract Shiva as he sat on Mount Kailash in a deep state of meditation. The tradition of Karva Chauth is perhaps a small form of homage to Goddess Parvati and her determination to raise Lord Shiva from his deep trance.

The spiritual significance of this ‘marriage’ is the union of the ‘activating energy’ or shakti of the female form with the dormant or ‘potential energy’ of the male form. Another interpretation of this ‘marriage’ is that it is the act of meditation (shakti) which releases the manifest spiritual energy of the seeker (sometimes referred to as the awakening of the chakras). The term Shiva-Shakti is often used to reference the inseparable nature of Shiva and Shakti.

The women of the community gather in the evening at a temple or a chosen household and celebrate the festival with singing of bhajans and traditional songs. A pot of water, called karva, is placed next to an image of Goddess Parvati for the purpose of the prayers or puja. Women will wear their finest clothes and jewelry for the occasion. 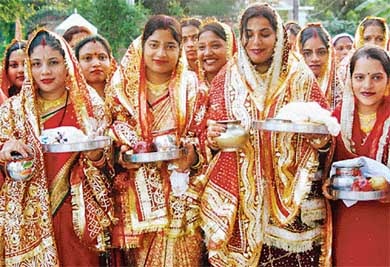 In recent years, the cosmetics and make-up industry markets heavily to women in the days coming up to this occasion. Beauty parlors are heavily booked as women treat themselves to make-up and hair-dressing appointments. In essence, it is a day of rest, relaxation, camaraderie and building relationships for women.

The festival concludes in the evening with the much anticipated sighting of the moon in the night sky. The fast is usually broken after the women pay homage to the moon while viewing it from behind a veil or sieve. According to the Upanisads, the moon is the provider of all food and nourishment – so, it is logical that the fasting women would acknowledge the moon before eating or drinking anything to mark the completion of the fast. A sumptuous meal usually follows, which indeed is a tradition for all hindu festivals and occasions!

May Paarvati brings good fortune and prosperity (-mangal-maangalye) to all (-sarva) her devotees. May she forever (-sarvaarth) accompanying Lord Shiva (-saadhike). May she give us refuge (-sharanye) in the protection of the three-eyed one (-triyambake). O beautiful and fair-colored one (-gauri), the consort of naaraayan (-naarayani), we bow to you (namo-stute) repeatedly.

Tell us about your Karva Chauth traditions by clicking on the Leave a Comment link below. Thank you for reading and sharing.

On Faith and Seasons Gayatri Mantra from RigVeda