Gayatri Mantra and its Meaning

Summary of the Gayatri Mantra

Gayatri Mantra (the mother of the vedas), the foremost mantra in hinduism and hindu beliefs, inspires wisdom. Its meaning is that “May the Almighty God illuminate our intellect to lead us along the righteous path”. The mantra is also a prayer to the “giver of light and life” – the sun (savitur).

Oh God! Thou art the Giver of Life,
Remover of pain and sorrow,
The
Bestower of happiness,
Oh! Creator of the Universe,
May we receive
thy supreme sin-destroying light,
May Thou guide our intellect in
the right direction.

Gayatri, the five-faced Goddess, is said to have domain over the five senses or pranas, and protects these five life-forces of those who chant the Gayatri Mantra. In her role as the protector, Gayatri is referred to as Savitri. 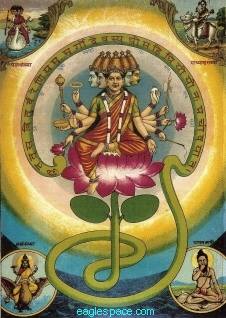 Origin of the Gayatri Mantra

The Vedas are widely considered to be the source of all true knowledge, the word “Veda” itself meaning “Knowledge”. Gayatri Devi also gave to mankind the “Gayatri Mantra”, also known as the “Guru Mantra” or the “Savitri Mantra”. It is one of the oldest mantras, and generally thought of as being amongst the highest and most powerful mantras of all. This mantra is therefore often referred to as “the Mother of the Vedas”. In the Bhagavad Gita, Lord Krishna had proclaimed to Arjuna – “Among all the mantras, I am the Gayatri”.

Chanting of the Gayatri Mantra

The ideal times for chanting the mantra are three times a day – at dawn, mid-day, and at dusk. These times are known as the three sandhyas – morning, mid-day and evening. The maximum benefit of chanting the mantra is said to be obtained by chanting it 108 times. However, one may chant it for 3, 9, or 18 times when pressed for time.

The syllables of the mantra are said to positively affect all the chakras or energy centres in the human body – hence, proper pronunciation and enunciation are very important. Sathya Sai Baba teaches that the Gayatri Mantra “will protect you from harm wherever you are, make your intellect shine, improve your power of speech, and dispel the darkness of ignorance (Dhiyoyonah prachodayaath)”.

Word for Word Meaning of the Gayatri Mantra

The Gayatri Mantra is unique in that it embodies the three concepts of stotra (singing the praise and glory of God), dhyaana (meditation) and praarthana (prayer).

Significance of Gayatri Mantra as Prayer

The Gayatri Mantra occupies a unique place in that it has both the power of mantra and of prarthana (prayer). A mantra may be articulate or inarticulate, or a combination of them, as with AUM. It has an inherent power, known as “Mantra shakti”, which has a positive influence not due to any philosophical meaning behind the mantra, but simply due to its utterance alone. The Gayatri mantra has both an intrinsic power (ie “mantra shakti”), through its mere utterance alone, and also an instrumental power (ie “prarthana shakti”), which is derived from the understanding of its meaning and philosophical significance. Hence, the repeated and correct chanting of the Gayatri Mantra, with proper understanding of its meaning, is believed to be of the greatest good to the individual. (Details of each syllable can be found in the Gayatri Mantra by Words article)

The prayer form of the Gayatri takes various forms. The Gayatri Mantra is also known as the Savitri Mantra, in which form, it is invoked as a salutation to the Sun. The form that can be used to pray to Lord Shiva is called Rudra Gayatri. Similarly, one may sing Ganesha Gayatri for Lord Ganesha, Hanuman Gayatri for Lord Hanuman, and Saraswati Gayatri for Goddess Saraswati.
Tagged with: audio • gayatri • meditation