Lord Mahavir was the twenty-fourth and the last Tirthankara of the Jain religion. He was born on the 13th day of the rising moon of Chaitra, in either 599 BC or 615 BC (depending on religious tradition). It will be celebrated on March 27th 2010.

According to Jain philosophy, all Tirthankaras were born as human beings but they have attained a state of perfection or enlightenment through meditation and self realization. They are the Gods of Jains. Tirthankaras are also known as Arihants or Jinas. 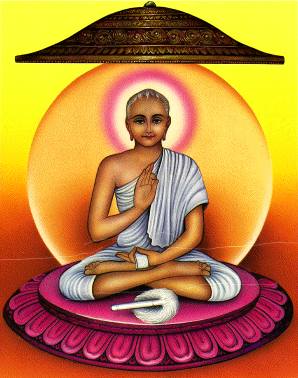 Every day Jains bow their heads and say their universal prayer, the Navkar-mantra. All good work and events start with this prayer of salutation and worship.

This five fold salutation which destroys all sin is pre-eminent as the most auspicious of all things.

aiso pancha namokkaaro : These five salutations are capable of
savva paavappaNaasaNo : destroying all the sins and this is
ma.ngalaaNaM cha savvesiM : the first happiness among all forms
paDamaM havai ma.ngalaM : of happiness.

In the above prayer, Jains do not ask for any favors or material benefits from their Gods, the Tirthankaras or from monks and nuns. They do not pray to a specific Tirthankara or monk by name. By saluting them, Jains receive the inspiration from the five benevolent for the right path of true happiness and total freedom from the misery of life.