Makar Sankranti is observed on the 14th of January every year and marks the astronomical event of the northward motion of the sun (uttarayana) from the tropic of capricorn towards the tropic of cancer. In India, it also marks the end of winter and the onset of spring and the progression or change (sankranti) of the sun into the sign or raashi of capricorn (makar). One may note that while the tropical zodiac marks the progression of the sun into Capricorn at a fixed date on the 22nd of December, the sidereal zodiac (in which the signs of the zodiac align to the sky constellations of the same name) marks this event on the 14th of January.

Makar Sankranti is one the rare festivals in hinduism which is based on a solar event rather than a lunar event. In 2010, it so happens that this solar event coincides with the lunar event of amavasaya and a grand solar eclipse! This grand astronomical event is being celebrated in the form of a maha kumbha mela at Haridwar which begins on January 14th and will last for forty days. An estimated five million people are expected to take a dip in the holy Ganga on the first day of this religious fair that occursonce every 12 years at four different locations (Haridwar, Allahabad, Ujjain and Nashik). 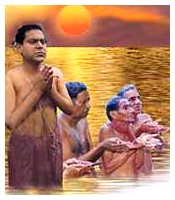 The most important bathing dates during the Kumbh Mela of 2010 are January 14 (Makar Sankranti), February 12 (Mahashivratri), March 15 (Somavati Amavasya) and April 14 (Mesh Sankranti and Baisakhi).

The Makar Sankranti day has considerable spiritual and historical significance attached to it since it marks a major change in the direction of the sun. Early morning salutations to the sun while taking a ritual bath in a holy river and chanting the scriptures or mantras are synonymous with hindu practices. The most famous and powerful mantra for saluting the sun is of course the Gayatri Mantra which can be chanted during the three sandhyas (or transition times) of the morning (dawn), afternoon (noon) and evening (dusk).