On Eaglespace, Blogging, and Social Media – My internet journey

It began as a simple idea. I wanted to learn about the web by starting a web page.

The date was December 14th 1995. The first page was probably less than 100 words long. It simply was the Gayatri Mantra, and a brief explanation. The internet archive snapshot below shows the original ‘site’ which was hosted on my ISP. 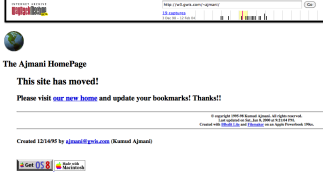 Then, in 1999 (or was it 2000?), I decided to register the domain eaglespace.com. People often wonder – why the strange sounding name for a site that was primarily meant for Hinduism? Well, that’s another story for another day.

So, eaglespace.com grew over the years. It turned into a labor of love where I documented mantras, Gods and Goddesses, Vivekananda lectures and many more articles. I have lost count of how many site iterations I have done over the 10+ years that eaglespace.com has existed. I have messed with more html, css, dynamic pages via php, edited audio samples, javascript, and mysql databases than you can ever imagine. Literally, thousands of hours have gone into the eaglespace site.

And, I have been rewarded by the love of the readers – with visits that grow every month, top page placement in Google search for certain keywords like Gayatri Mantra and so forth.

Glimpses of Divinity – The Blog

But there was something missing. So, a few years back, I did what everyone else was doing – I started this blog. This was an addition, a sister to the main eaglespace.com site. This would be a place where I could use a little more creative freedom, interactive more with my readers and learn and use the latest web technologies.

The real purpose of the blog became clear later – I found myself to be writing answers to questions that my daughter (growing up in the USA) may have about Hinduism some day – questions that we never asked growing up in India. Because, as they say back home – you don’t ask too many questions – you just live the Hindu life by immersion.

The blog has grown too – with over 2000 subscribers as of July 2011. I dare say that the interaction with readers has been a great learning experience for me. But, like they say, things change.

Social media arrived on the scene. I added a facebook page for eaglespace (which enjoys over 1000 ‘likes’ as of July 2011) and I have great interaction with many good folks who follow that page.

But, then twitter came into my consciousness. I started with AjmaniK and then created HinduSpace to discuss spiritual issues.

At first, twitter seemed very ‘hard to get used to’ for me. I would hop on and off with no real plan or purpose, trying to make sense of a world that ‘spoke’ in 140 characters. It was hard to get used to ‘brevity’ after the ‘freedom’ of a blog. But, like any good engineer, I treated it as a challenge. And it grew on me slowly. And it grew on me some more after I met some brilliant folks like Wayne Mcevilly and Jennifer Brown.

These are the thin threads that kept me alive on twitter. Until I found my feet, slowly, and met a whole bunch of great folks. Folks who would actually have a conversation with you, instead of just pushing their ‘message’ onto you. I have learnt tremendously from them, and dare I say – being forced to think in 140 characters has made me into even more of a ‘thinker’ than I used to be :-)

Giving back via #SpiritChat

So, that brings me to the idea of #SpiritChat. A live twitter ‘conversation’ that I propose to talk about matters of the ‘spirit’. I have searched – and I cannot find anything on twitter which focuses on this simple topic, which, perhaps, is of great importance to most of us. It’s time for me to give back to you, my friends.

Come join me in #SpiritChat.

Be Well. Be Still. Be the Love.

P.S. I hope this post helps new and long-time readers connect the dots between all the existing ‘sites’ in the eaglespace family. As always, your thoughts and reactions are welcome in the comments.

My Conversation with the Divine Guru On Compassion – A brief note

4 Responses to On Eaglespace, Blogging, and Social Media – My internet journey