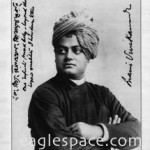 Swami Vivekananda said that hinduism is the only true universal religion among all the major religions in the world. He gave several reasons for his claim. Hinduism is the only religion whose existence does not depend on a particular person or personality. The foundation of hinduism – the vedas – do not have any particular individual ascribed to them (unlike say, the Bible or the Koran). The rishis and authors of the vedas were many, and what is significant about them is the principles that they taught.

Karva Chauth – A Celebration for Women