The Three Pillars of Hindu Thought

Swami Vivekananda was a great teacher of the Vedas and Vedic thought, and of the Upanishads in particular. His lecture on the Vedanta (Lahore, 1897) outlined several key concepts of Hinduism and clarified a lot of misconceptions regarding the Vedas and the Upanishads.

According to Vivekananda, the three Prasthanas are considered to be the three important pillars in the study of all the systems of Hindu religion. The Upanishads, the Vyasa Sutras and the Bhagavad Gita have been taken up by every sect in India that claims Hindu orthodoxy – whether dualist or advaitist, Shankaracharya or Ramanuja or Chaitanya.

The First Pillar – The Upanishads

The Upanishads (also known as the Shrutis) or the Revelations are the first pillar of the system. The central theme of the Upanishads is – “What is that knowing which we know everything else?” 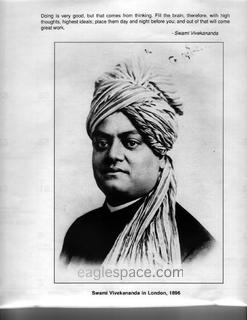 The theme of the Upanishads can be viewed as an attempt to find an ultimate unity among all things. “Knowledge is nothing but finding unity in the midst of diversity”. The goal of the Upanishads is to find unity in the midst of infinite variation in “this marvelously diversified universe, where prevail infinitely different names and forms, in matter and spirit – each thought differing from every other thought, each form differing from every other form”.

The Upanishads make this task (of finding unity in diversity) a little bit easier by using the idea of Arundhati nyaya (the law of Arundhati) or the proximity principle. The easiest way to show someone the small star Arundhati is to first show them the big brilliant star nearest to it – and then slowly shift their sight to the smaller star.

Almost all the Upanishads begin with dualistic teaching, Upaasana. God is first taught as some one who is the Creator of the Universe, its Preserver, and unto whom everything goes at last. He is one to be worshipped, the Ruler, the Guide of nature, external and internal, yet appearing as if He were outside of nature and external.

One step further, and we find the same teacher teaching that this God is not outside of nature, but immanent in nature. Finally, both ideas are discarded, and whatever is real is He; there is no difference. “Shvetaketu, That thou art” – तत्वमसि श्वेतकेतु ।

“That Immanent One is at last declared to be the same that is in the human soul. There is no compromise; there is no fear of other’s opinions. Truth, bold truth, has been taught by the Upanishads in bold language, and we need not fear to preach the truth in the same bold language today!”

The Upanishads and Science

This is remarkably similar to the central theme or holy grail of all science – to find unity in the midst of diverse physical phenomena! It is remarkable that Swami Vivekananda was indirectly discussing the scientific concept of “the unified theory” of quantum physics in 1897! Many of Swami Vivekananda’s lectures show that he was a strong proponent of the fact that “any religion worth practicing has to stand up to the scrutiny of science”.

The Second Pillar – The Veda Sutras

The Third Pillar – The Bhagavad Gita

The Bhagavad Gita is the third pillar of the Hindu system. It is a divine commentary on the Vedanta and forms a bridge between the Upanishads and the Sutras. This third pillar is the most widely read book among all Hindus, and is perhaps the most readable and “relatable” of all Hindu scriptures.

Have you read the Bhagavad Gita yet? What is your favorite Hinduism scripture? Please share with us in the comments below.

Tagged with: that thou art • upanishad • Vedanta • vivekananda

One Response to The Three Pillars of Hindu Thought