Gita Jayanti is a celebration of the gift of the Bhagavad Gita by Lord Krishna to the people of the world. It is celebrated on the Ekadashi or 11th day of the bright half of the lunar month in December/January every year (16th December 2010). The occasion is celebrated with special readings of the Bhagavad Gita in temples and hindu organizations across the world. Some organizations also distribute copies of the Gita for free to promote the message of this holy scripture.

The Universal Message of the Gita

The Bhagavad Gita is considered by many Hindus to be the holiest of all the scriptures in Hinduism. It is one of the most often quoted Hindu scriptures within Indian (and perhaps even Western) literature. The Gita is a central treatise of the expansive epic, the Mahabharata. It is often referred to as the jewel in the crown of hindu philosophy and religious thought. The Gita consists of 18 Chapters and 700 verses that formed the discourse given to Prince Arjuna of the Pandava dynasty by Lord Krishna on the battlefield of Kurukshetra. 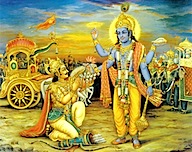 While the Bhagavad Gita is considered by some to be the Bible of Hinduism, “the teachings of the Gita are broad, sublime and universal. They do not belong to any particular cult, sect, creed, age, place or country. They are meant for all. They are within the reach of all. The Gita has a message for the solace, peace, freedom, salvation and perfection of all human beings.”

The four Yogas explained in the Gita

Prince Arjuna was overcome by doubt and fear as he faced the prospect of doing battle with his half-brothers, gurus and friends. Lord Krishna, an incarnation of Lord Vishnu, removed his doubts by teaching him about the four-fold yogas of karma (action), bhakti (devotion), gyana (devotion) and prema (love).

Some related articles on Gita Jayanti are referenced below:

Gita Jayanti by Swami Sivananda
Gita Jayanti, or the birthday of the Bhagavad Gita, is celebrated throughout India by all the admirers and lovers of this most sacred scripture. It was on this day that Sanjaya narrated to King Dhritarashtra the dialogue between Sri Krishna and Arjuna, and thus made the glorious teachings of the Lord available to us, and to people of the world, for all time.https://www.divyajivan.org/articles/siva/gita%20jayanti.htm

We will be featuring more articles on the Bhagavad Gita in the month of December – stay tuned!

One Response to Significance of Bhagavad Gita Jayanti