Do you really need a Guru? A lesson from the Ramayana

It is said that satsang, an assembly of devotees or spiritual seekers, is one key element of helping you along your spiritual path. So, when I received an invitation to attend a satsang with Amma Sri Karunamayi in my town, I could not pass up the opportunity for my third visit with her in three years. Little was I to realize that I would walk away from the session with an entirely unique perspective on the Ramayana and the role of the main characters – Shri Rama, Mother Sita and Hanumanji.

For those who have never read, or been exposed to the Ramayana, here is a brief synopsis – mostly from memory, so please excuse any errors!

Shri Rama, an avatar of Lord Vishnu, was the son of King Dasaratha of Ayodhya. As per royal tradition, being the eldest son, he was the rightful heir to the kingdom – but, just before his coronation as Yuvraaj (heir apparent), one of King Dasaratha’s wives, Kaikeyi, was instigated by one of her favorite maids (Manthara), to ask the King to fulfill the two boons he had promised to Kaikeyi after she had saved his life during a battle. The two requests made by her were – banishment of Rama to the forest for fourteen years, and appointment of her son, Bharata as the heir apparent instead of Rama. King Dasaratha was honor-bound to grant her requests, and Lord Rama cheerfully accepted to fulfill his father’s promises to the youngest queen. However, his wife, Sita, and brother, Lakshmana, insisted that they accompany Rama to the forest, to which he reluctantly agreed. 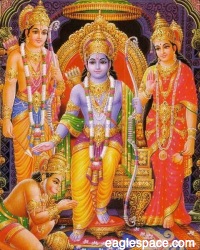 It should be mentioned here that Shri Rama, being an incarnation of Lord Vishnu, was imbued with all the qualities of a perfect man. Ascetics would abandon their long meditations and yogis were drawn to his persona like a moth is drawn to a flame. Sita, the wife of Shri Rama, was born of Goddess Earth, and was the ideal wife to him. Lakshmana, who accompanied Rama and Sita for fourteen years of exile, is considered the ideal brother.

Shri Rama as Parmaatmaa – Supreme Being

Shri Rama is considered to be a representation of param-aatmaa, or the supreme Godhead. He is the ultimate goal to be attained by all human-beings. His wife, Sita, was already in his company at all times – in effect, she could not have asked for anything more in life. However, there is an incident during their exile which later caused a lot of distress for Sita and Shri Rama. Sita spots a ‘golden deer’ in the forest, and she wants her husband to chase/hunt down that deer for her. Lakshmana tries to dissuade Rama from going after the deer, saying that it is just a mirage or a distraction.

There is a powerful analogy here – this unique (to me) perspective was provided by Amma Sri Karunamayi.

Sita is the jiva-aatma (physical form), who gets distracted by the golden deer (desire), and despite the entreaties of Lakshmana (the intellect), and ignoring the fact that she already has the supreme being in Shri Rama (param-aatmaa) by her side, becomes obsessed by the fulfillment of her desire(s).

The obsession with desires – the cause of misery!

So, the jiva-atmaa (the physical being, Sita) has been separated from the param-aatma (the supreme being, Shri Rama) due to the lure of desires (the golden deer). In the Ramayana, Hanuman, known to be the ideal sevak (server), and often depicted as bowing in front of Rama and Sita, becomes the instrument of the re-unification of Rama and Sita. It is Hanuman who tracks down Sita in Ravana’s kingdom (Lanka), creates havoc and then returns to the forest for the assault on Lanka with Rama and his army. A huge battle ensues, Ravana is vanquished, and Shri Rama and Sita are re-united by the unparalleled help of the vaanar sena (monkey army) led by Hanuman-ji.

The role of the Guru

The proposition is that when we human beings are distracted by desires, it is the Guru, who can accelerate the process of re-uniting our physical beings (jivaatmaa) with the supreme being (paramatmaa)! The inference is that Lord Hanumaan is not simply the ideal server of Rama and Sita (as is the role often ascribed to him), but he is also the Guru, the agent of re-unification! While some of you, gentle readers, may already be aware of this role of Hanuman, it surely was a pleasant ‘revelation’ for me.

Some of you may be questioning – well, perhaps Rama would have been re-united with Sita eventually, even without Hanuman’s help. Yes, that is perhaps true. However, it cannot be denied that the assistance of Hanuman-ji, the Guru, considerably shortened the time of Rama and Sita’s separation to just a few months!

Do you have a Guru whose teachings are accelerating your progress on your spiritual journey? Or do you still think that a Guru is unnecessary? Please share in the comments below. Namaste!

Journey of a Musical Mystic – The Wayne Mcevilly Interview Can Science exist without Spirituality? Ten Questions with a Yoga Practitioner

8 Responses to Do you really need a Guru? A lesson from the Ramayana